Bob Dylan, hailed as one of the great song writers of the 20th century penned a song called “Shelter from the Storm” in 1975. The lyrics to the song have been regarded as a poetic masterpiece, which is probably why he was awarded the Nobel Prize in Literature in 2016. The third verse in particular uses imagery which is akin to something we see in the visible church today. Dylan writes, “Not a word was spoke between us, there was little risk involved. Everything up to that point had been left unresolved. Try imagining a place where it’s always safe and warm. Come in, she said I’ll give ya shelter from the storm.”  These lyrics describe something taking place in the the fastest growing movement under the name of “Christianity,” the NAR (New Apostolic Reformation)  The NAR, along with a host of serious issues (articulated in our previous blogs) has become somewhat of a shelter for the unqualified.

What would you do if you discovered that a certain hospital performing heart surgeries , used unqualified people to operate on patients?  I’m sure you would expose the hospital, and warn as many people as possible to avoid them!  The NAR in like manner is a movement which shelters unqualified “apostles, prophets and pastors,” and provides them with a platform to perform deadly surgery on the souls of men and women. I remind you that the “apostles and prophets” in this movement are already unqualified simply because of the fact that the church has “…been built on the foundation of the apostles and prophets..” (Eph. 2:20)  This makes it impossible for anyone to hold such offices in the church today. However, the office of Pastor is still functioning in Christ’s church, and many who have proven themselves unqualified for this position have found refuge in the NAR. The question that this article seeks to answer is simply this: why is a movement claiming to represent the true church of Jesus Christ sheltering unqualified individuals?

The Bible is absolutely clear regarding the qualifications for a pastor.  Paul writes to Timothy – “An overseer (a word used interchangeable with elder and pastor), then, must be above reproach, the husband of one wife, temperate, prudent, respectable, hospitable, able to teach, not addicted to wine or pugnacious, but gentle, peaceable, free from the love of money.  He must be one who manages his own household well, keeping his children under control with all dignity (but if a man does not know how to manage his own household, how will he take care of the church of God?), and not a new convert, so that he will not become conceited and fall into the condemnation incurred by the devil. And he must have a good reputation with those outside the church, so that he will not fall into reproach and the snare of the devil.”
(1 Tim. 3:2-7)
Paul also tells Titus that  “he must hold firm to the trustworthy word as taught, so that he may be able to give instruction in sound doctrine and also to rebuke those who contradict it.” (Tit. 1:9)
To sum it up: a pastor must be qualified in two vital areas, Character and Doctrine.

In light of the clear teaching of Scripture regarding who gets to be a pastor, I would like to briefly examine two individuals who have found shelter in the NAR, even though they are unqualified for the position.

1. Todd Bentley
How in the world does this man still have a voice in the visible church?  Answer: The NAR has sheltered him. It is a well-known fact that Todd Bentley committed adultery and got a divorce.  He went on to marry the woman whom he had an affair with providing us all with evidence that this man was unrepentant.  Clearly this is someone who has disqualified himself from ministry (even though it could easily be argued that he was never qualified doctrinally anyway).  Yet, Todd Bentley has been fully restored and is continuing to deceive millions. This didn’t happen by accident. Two popular “apostles” in this cancerous movement played a major part in restoring this fraud.  Rick Joyner and Bill Johnson paved the way for Bentley to continue preaching his delusional message, accompanied by false signs and wonders, ridiculous claims of raising the dead, and bizarre behavior which has absolutely nothing to do with Biblical Christianity. A second individual who has found shelter in this unbiblical movement is none other than…
2. Mark Driscoll
In short, this man basically fled church discipline after serious allegations of plagiarism were charged against him. (You can read more about this saga at this here.)
There is no doubt that this has damaged his reputation with those outside the church, disqualifying him from pastoral ministry, yet in the short time of about two years he is already pastoring a new church (The Trinity Church, Scottsdale, Arizona). And guess which crowd he’s running with now? The NAR. They have gladly taken him in and sheltered him from the storm of those “stuffy christians” who have called for repentance. Charisma Mag, the online purporters of NAR theology have recently promoted Driscoll and his new book “Spirit-Filled Jesus.” Not only are they promoting his book, but he will even be speaking at the Charisma Conference!  Sadly, another unqualified “pastor” sheltered by the NAR.

These are just two examples among many! Steven Furtick wrote a book called “Unqualified” in which he demonstrates how unqualified he actually is for pastoral ministry by the way he mishandles God’s precious Word. Therefore, it is no surprise that he too has been embraced by the NAR, evidenced by his more recent associations and conferences like the “Dominion Camp Meeting” where in 2017 he partnered with the “apostle” Rod Parsley, the supreme heretic Jesse Duplantis, and Perry Stone.

I believe that the reason why the NAR is so quick to shelter unqualified ‘pastors’ is simply because this movement is not from God.  This movement has not come about through a serious exegetical study of the Word of God, and has consistently shown a complete lack of discernment.  This movement is a continuation of the “Third wave” Charismatic movement which prepared the way for some of the most destructive false teachers in church history.  This movement not only produces these false teachers, but gladly takes in and shelters those who have been exposed in more doctrinally sound environments.

Coming back to Bob Dylan’s song I think it is fair to say that the NAR’s message to the unqualified is this: “Come in, she said I’ll give ya shelter from the storm.”

Instead of being sheltered by this abhorrent movement these “pastors” should be called to repentance. God is Holy and will not be mocked. The NAR may be able to protect these men from the temporal storm of discerning christians, however who is going to protect them on the day of Judgment when everything will be exposed? Who will be their advocate on that day?

This is a reminder that every single one of us must flee to Christ and throw ourselves at His mercy! Not only did He bleed and die upon the cross to satisfy the wrath of God, but he imputes His perfect righteousness to the account of those who humbly repent of their sin and put all of their trust in the Risen and Returning Christ.  Only with our sins wiped away and the righteousness of God that comes through faith will we be sheltered and able to withstand the storm of God’s righteous Judgement.  As Jesus Himself said in Matthew 7:25, “And the rain fell, and the floods came, and the winds blew and slammed against that house; and yet it did not fall, for it had been founded on the rock.” 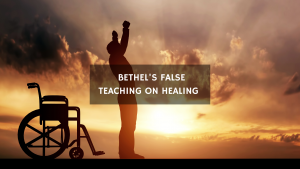