Two biblical signs of the last days are being fulfilled in our midst – the calamities in this world, and the proliferation of false prophets and false teachers. The former, being a threat to the latter – specifically the false prophets of the New Apostolic Reformation. These “prophets” for profit are failing miserably in their attempt to make earth look like heaven. They also fail miserably when it comes to foretelling the calamities they attempt to quench through their decrees and declarations. The declarations emanating from Bethel church failed to halt the devastating Carr fire in 2018, and most recently they failed to raise Olive Heiligenthal from the dead. The coronavirus presents a new opportunity for the atmosphere shifters and little gods of Bethel to wield their imaginary superpowers and fool their biblically illiterate followers. This would have been the ideal time for Kris Vallotton to release the ultimate weapon at his disposal against the virus – a purple bubble of protection. Obviously it does not exist, and the pompous prophet of Bethel has come up with a new strategy against the current virus – send it to Mars.

Firstly, a reminder of Vallotton’s purple bubble of protection, which really would have been perfect to stop this virus as it carried it’s own atmosphere. In December 2016, Vallotton released a teaching – Multi Generational Vision. During this message he also released purple bubbles.

Transcript: I know this isn’t biblical but it’s not a non biblical, I have to say that now coz all these people write terrible things but, I see this purple bubble that I have prophesied over people that there’s this purple bubble and it’s kinda like the glory the lifter of my head and the Lord’s shield about me, I see the shield like a purple force field, like, kinda looks like an egg that God puts people in and it’s like impervious to biological things, like sickness and disease, and it’s impervious to bullets and bombs and uh things like uh, abductions, rapes, murders, and uh it’s impervious to, just it’s like it has it’s own atmosphere, so I just, I don’t know what that is, but I just release this purple bubble..it might be the New Testament hedge that was around Job…we just release this purple bubble over us, yes..

KV: I know this isn’t biblical but it’s not a non biblical.
In other words it isn’t biblical, just the vain imagination of a false prophet, speaking false words for which he will be held accountable one day.
KV: I have to say that now coz all these people write terrible things.
These people probably refers to people like myself and a host of other writers, who compare Vallotton’s terrible teachings to what scripture actually teaches. Bethel’s culture is one of avoiding any form of questioning or valid criticism. If anyone is in a bubble it’s the Bethelites who are impervious to the clear teachings of scripture.
KV: it’s like impervious to biological things, like sickness and disease
If that’s the case, why is Vallotton neglecting his ability to release purple bubbles?
KV: ..it might be the New Testament hedge that was around Job
Vallotton must have stopped reading at Job 1:10, because God gave Satan permission to afflict Job: “ And the Lord said to Satan, “Behold, all that he has is in your hand. Only against him do not stretch out your hand.” Job 1:12.
He lost servants, livestock and all his children. Later, Job endured his own form of a plague when God gave Satan permission to afflict Job physically:
“So Satan went out from the presence of the Lord and struck Job with loathsome sores from the sole of his foot to the crown of his head. And he took a piece of broken pottery with which to scrape himself while he sat in the ashes.” Job 2:7-8
KV: ..but I just release this purple bubble
Well then you must be God. Only God can release things, decree and declare things into existence.

Vallotton must have forgotten about his purple bubble lie, and has come up with an outlandish solution to the virus.

Sending the coronavirus to Mars –

Vallotton: Lets just begin to speak against this virus, and lets use our faith to move this virus out of…lets say this..you..we can send it to Mars coz we don’t think there’s any Martians there, so why don’t we just altogether send this thing to Mars..wherever, wherever out of the universe..and lets just begin to believe God and lets fast, a forty day fast of negativity and fear and lets feast on chocolate…this is the fast I love, we will fast fear and we will eat chocolate..

In their quest to make earth look like heaven (which by the way should include the absence of physical death) Bethel has grown not only in desperation, but pure lunacy. They are optimistic about the future of this world, while Jesus was pessimistic. If God  rid the world of all calamities, he would be going against his own word. What we are experiencing pales in comparison to what must still come, these are merely the birth pangs: “Then he said to them, “Nation will rise against nation, and kingdom against kingdom. There will be great earthquakes, and in various places famines and pestilences. And there will be terrors and great signs from heaven.” Luke 21:10-11

There is a greater chance of finding a Martian with sound theology, than expecting truth to come from the lips of Vallotton…unless he repents and is born again.

For more  resources on Bethel please click on the links below: 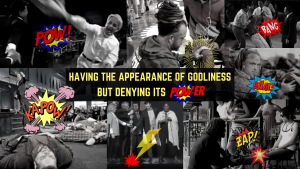