Every kind of false teaching comes in the form of a pre-packaged ideology which is designed to lure people away from the Written Word of God and into error and delusion. Unfortunately large parts of the visible church have fallen prey to these ideologies which explains why there is a famine in the land for the hearing of the Word of God!

Socialism, feminism, capitalism, communism, mormonism… The English language is full of ‘isms’! The suffix ‘ism’ entered the English language in the 1600’s and by the 1900’s was being used specifically to signify a pre-packaged ideology. You might be thinking… Thanks for the English lesson, but what does this have to do with Christianity!? This has a lot to do with Christianity, in fact this has much to do with what we find eroding the foundations of biblical Christianity. Let me narrow it down. This has a lot to do with what we find waging war against the mind of every true Christian. An ideology is a system of ideas and beliefs. Over the course of Church history Satan and his spokesmen have formulated numerous pre-packaged ideologies with the two main purposes: 1. To keep the unregenerate blinded to the Gospel and comfortably on the wide road to hell. 2. To lead believers astray in order to make them ineffective in the proclamation of the true gospel which is the only message that saves. We should be grateful for the ‘isms’ because they help us to identify these ideologies and deal with them accordingly.

They are not always easy to identify, however, once you begin to dig beneath the surface it becomes evident that Satan has only re-packaged old ideologies in new boxes. It’s like a South African walking into the cereal aisle in an American grocery store. There are so many different kinds of cereal that choosing one can become an impossible and painful task. However, once you realize that many are just offshoots of a specific kind then the choice becomes easier. Much false teaching within the Church today is just an offshoot of something the Church has already identified and exposed sometime in in the past, which makes the study of Church history all the more important. Let me simplify it this way: Every kind of false teaching comes in the form of a pre-packaged ideology which is designed to lure people away from the Written Word of God and into error and delusion. Unfortunately large parts of the visible church have fallen prey to these ideologies which explains why there is a famine in the land for the hearing of the Word of God! This series will look at some of the more popular ‘isms’ which are causing the most damage to the Church and also call every true believer to stand up and ‘put on the whole armor of God, that you may be able to stand against the schemes of the devil.’ (Ephesians 6:11) This is essentially a call to take every ‘ism’ captive.

The Apostle Paul in his second letter to the Corinthians provides us with invaluable insight into how we are to obey this charge. In Chapter 10 as he begins to defend his apostleship and ministry against false teachers he writes in verse 3 to 5, “For though we walk in the flesh, we are not waging war according to the flesh. For the weapons of our warfare are not of the flesh but have divine power to destroy strongholds. We destroy arguments and every lofty opinion raised against the knowledge of God, and take every thought captive to obey Christ…”  These arguments and lofty opinions are ideas and speculations, which are ‘isms’ that raise themselves up against the knowledge of God and the Gospel. We don’t play around with these ‘isms’. We don’t entertain these ‘isms’. Paul makes it clear, we destroy these ‘isms’ by taking them captive. We do this by uncovering the christian veneer which makes them so deceptive by using ‘the sword of the Spirit, which is the word of God…’ making them obedient to Christ. We expose them using Scripture and we replace the error with truth. Let’s remember that when we are dealing with false teaching our only weapon is the Word of God. The more we know our weapon, the better we will be at wielding it for the sake of our own souls and the souls of our brothers and sisters in Christ. Our motivation for doing so must always be rooted in a love for Christ, which manifests itself in a desire to obey Him, that we might ‘save others by snatching them out of the fire.’ If we get our motivation wrong we might become like noisy gongs or clanging cymbals.
Coming back to the ‘isms’. The question that needs to be asked is: What are some of the most prominent ‘isms’ which need to be taken captive today?
There are too many to deal with in one series, so I have decided to focus on four which I believe are most dangerous to the church in 2017:

In the next couple of weeks we will deal with each ‘ism’ individually. Today let’s have a look at the first one, Quietism.

What is Quietism?
Quietism is an offshoot of mysticism. Mysticism is complex. The Merriam-Webster Dictionary describes it this way: the belief that direct knowledge of God, spiritual truth, or ultimate reality can be attained through subjective experience. The ‘christian’ mystic is one who seeks an experience with Christ, to hear Christ speak through means apart from the Written Word of God with one of those means being Quietism. When we think of centering prayer, soaking prayer or a Rhema word from God we are most likely dealing with Quietism. Now immediately the Charismatic/NAR movement comes to mind. Quietism is indeed a major part of the NAR as they seek to hear God speak apart from Scripture, however it’s important we understand that this is not only a part of aberrant movements like the NAR or what I call the silly seeker sensitive movement. This has crept its way into seemingly solid churches which is what makes it so dangerous. Nathan Busenitz provides a helpful description when he writes, “Quietism—also called “higher living”—is an approach to the spiritual life that emphasizes “letting go and letting God.” It often borders on a strange dualism, where the physical world is considered frail and transient, while the spiritual world is the home of truth and joy. In quietism, prayer is stressed as the emptying of the mind to just “rest” in the presence of God. It presents the clear mind as the opposite of worry, and the spiritual mind is the one that is still, almost disconnected from the physical world around it.” That sounds very much like another ‘ism’ which the Church has dealt with, Gnosticism. The ‘presence of God’ is a big emphasis in quietism, however once we peel back the ‘christianize’ we see it for what it is: An unbiblical practice with its roots in Hinduism and Buddhism!  Quietism teaches that sinless perfection and inner peace can be achieved through contemplation and experience with the Divine. Now replace those empty words with some ‘christianese’ and you get this: “I believe you can look at solitude, community, and ministry as three disciplines by which we create space for God. If we create space in which God can act and speak, something surprising will happen. You and I are called to these disciplines if we want to be disciples.” That’s a direct quote from deceased but popular catholic mystic, Henri Nouwen, pictured below. Photograph of Henri Nouwen in the 1990s taken by Frank Hamilton.
……
You may say, “well he’s a catholic, so no big deal”. Other than the fact that many so-called protestants are promoting unity with the Catholic church (so much for the reformation), the problem is that popular teachers within mainstream evangelicalism embrace and promote Nouwen’s teachings! For example Rick Warren quoted him in a tweet which read, “Hiddenness is the place of purification. In hiddenness we find our true selves.”
….

What does that even mean! Might as well have said “shabashabashaba.” Both have the same depth of meaning and substance. Tim Keller also quotes Nouwen in a tweet which reads, “Our brokenness has no other beauty but the beauty that comes from the compassion that surrounds it.”

No comment on that one. If you figure out what it means please let me know.
So is Quietism biblical? Is the version of prayer which suggests we need to quiet and empty our minds in order to hear from and experience God biblical? The answer is an emphatic NO! You will not find this taught anywhere in the Bible. Someone may quote Psalm 46:10, which reads “Be still and know that I am God” and claim that they have Biblical support, however that verse has nothing to do with Quietism. If you study that verse in context you’ll find out very quickly that Psalm 46:10 is not a verse you should be applying to yourself unless you would like to experience the wrath of God. That verse is a warning to all the nations that oppose God and his people. God is saying “Be still”. In other words, ’Shut up!”, “Stop your fighting!” and KNOW THAT I AM GOD! The call for stillness before the Lord is not a preparation for worship or prayer, but for impending judgment.
…..
Quietism is an imposter in the church which must be quieted (pun intended). Quietism erodes the mind of the Christian because it draws the Christian away from the Written Word of God and causes the Christian to trust his/her subjective feelings rather that the objective truth of Scripture. Quietism erodes the Gospel because it causes people to believe that there is truth within them, rather than recognizing that “The heart is deceitful above all things, and desperately sick…” Instead of drawing us closer to Christ, Quietism only draws us away from Christ who paid the price upon the cross by bleeding, suffering, satisfying the wrath of God in our place, dying and raising from the dead so that a Holy and just God could forgive and justify wicked, hell-bound sinners like us. Quietism provides a false peace and draws us away from the true peace we so desperately need with God, which only comes through union with our Lord Jesus Christ. Quietism practically denies the sufficiency and authority of scripture, even if those who practice it claim that scripture is sufficient. Don’t be fooled. Rather take this ‘ism’ captive and make it obedient to Christ. 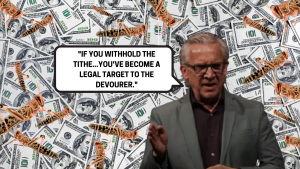 4 thoughts on “TAKING EVERY “ISM” CAPTIVE”